“I long to see the gospel permeate South Africa, and I am convinced of its power to change lives and bring real hope. It indeed is the power of God unto Salvation (Romans 1:16). It is my prayer that by God’s decree the majority of people in South Africa would be converted, either by the […]

Luané Mclachlan has a passion for speaking the Word of God in new and creative ways. Radio is but one of the mediums she makes use of to make Him known. She loves art, media and social media and finds joy in expressing herself creatively. She is married to her best friend and they have […]

Terrence and Bonita Meyer are a beautiful couple who loves God and has a great passion for His people, particularly married couples. They have two children, Terrence and Taryn, who are respectively in matric and busy with tertiary education. Two dogs also form part of their lovely family. While Terrence is self-employed and Bonita is […]

Thando Melane is a holistic, impactful and impressive leader. He has a great gift for public speaking, engaging and interacting with his audience. He also has the unique ability to be able to relate to both mature and young audiences from various backgrounds. He describes himself as a modern-day South African charismatic leader for today’s […]

Tolu George is a pastor, speaker, author and radio presenter. She co-pastors Jesus House for All Nations with her husband, Olu, who also presents on Radio Cape Pulpit.  Tolu is the mother a three adult children and the grandmother to four lovely granddaughters. She graduated with a BSc Honours Degree in Geography and Planning in […]

Kobus Pauw has been married for 26 years and has three children. His passion in life is to live life to the fullest and help people reach their God-given potential. One of his greatest desires is to see married couples in successful, healthy marriages and to assist them to work through issues and find solutions. […]

Zoë George is a law student who loves Jesus and music. She enjoys spending her time listening to and creating music and lives by the following motto: “Today is the tomorrow you talked about yesterday.” Her favourite Bible scripture is 1 Peter 5:7. It says: “Cast all your anxiety on Him, because He cares for […]

Dmitri Murray is a well-known voice on Radio Cape Pulpit and was born in Mitchells Plein. He is an ex-drug dealer who believes that praise and worship is a way of expressing and celebrating his freedom in Christ Jesus.  After an attempted suicide and a radical encounter with the God who preserved his life, he […]

Vukile Gawula holds a Bachelor Degree of Arts from the University of the Western Cape, a Higher Diploma in Education from the same institution, as well as a Certificate in Leadership from the LBC School of Ministry, among other qualifications. He is a teacher at Ikamvalethu High School and also Head of an Education Department […]

Bertha le Roux-Wahl became a household name when she played the role of Emma in the popular Afrikaans soapie, 7de Laan. She used this platform to spread the joy of the Lord. As a mother of two daughters, she has a nurturing quality that makes her relatable to listeners. She believes that as a presenter […]

Reverend Johann Els is a seasoned radio presenter, a preacher of the gospel of Jesus Christ since 1985 and a recording gospel singer. He describes himself as someone who will defend God’s honour without being a so-called “people pleaser”.

Marius du Randt works as a logistics manager and is the worship leader at NG Stellenberg’s youth services. He is also involved with Numa Life where he is a part time worship leader, as well as the #Imagine movement. The motto that he lives by is: “When your heart is ready to seek, your eyes […]

Vicus Kruger is a bodyboarder, rock climber, youth pastor, radio presenter and the National Producer for the #imaginemovement. He is currently part of the youth ministry and worship team at Suider Paarl Gemeente. As part of his work he is involved with schools in and around their community. He lives by the motto that is […]

Warren Elliot is an artist and songwriter.  He is happily married and the father of seven adopted children. He became well-known as a prominent songwriter with the Mighty Men anthem that he composed and performed at the Mighty Men Conference in the Western Cape.  He tours regularly and has released several albums.  He is also […]

Ryno Turketti is a passionate follower of Jesus Christ, a husband, pastor and barista. He says the best part of his job is that he can combine his passion for ministry, surfing, coffee, travelling and music and make a difference in the lives of people all across the globe. Ryno also champions Project Amazing Grace […]

Heinz Winckler, winner of the first series of the South African idols competition in 2002 and well-known South African artist, is currently working on his 8th studio album and second Christian Contemporary Worship album. He is once again teaming up with Daniel Ornellas, an expat producer based in Nashville, TN. Earlier in 2019, Heinz went […]

Frank Furniss originated from the Western Cape and grew up in Tulbagh. He is a worship leader and skillful guitarist, producer, songwriter and vocalist. Internationally, he has worked with artists such as Will Smith, Queen, Annie Lennox and Katie Melua. His return to South Africa resulted in many other opportunities where he played the guitar […]

Phillipine Morkel was born in Somerset West and is the youngest of four children. She has had a passion for singing from a young age, and her dreams started to realise when she dedicated her heart to the Lord in 1995. She then released several albums, nationally and internationally, on various Christian radio stations, such […]

Anele Joja is a traditional gospel singer and worshipper who has been raised by God for a time such as this. He has been in the music industry for some time serving in local traditional and gospel music groups, community choirs, as well as church choirs. His primary objectives are to preach the gospel of […]

Reinette Lynael Myburgh grew up in the Free State farming community. She then moved to East London where she got married and had three children. She worked in the retail sector for several years after coming to know Christ but was later given an opportunity to work at GOD TV Africa. Life has not been […]

Bongani Msibi is the Senior Pastor & Founder of Christ Worship Church International and serves in the church with his wife, Pastor Lindiwe Msibi. They are blessed with two beautiful children, a son and daughter called Unqobile and Mikateko. Both of them are public speakers with a strong prophetic message for our generation. Pastor Bongani […]

Mpumzi Rasmeni is a professional gospel artist, musician, motivational speaker, master of ceremonies and a father of two. He has five years’ experience as a radio broadcaster. With a love for the entertainment industry, it is no wonder that he found his voice in radio. Since joining Radio Cape Pulpit in 2018, the future continues […]

Vuyokazi Charity Matu is one of the founders, directors and shareholders of Okuhle Media, a film and television production company that produces content for broadcasters and brands both locally and internationally. She was born in the rural Eastern Cape and studied at the University of Transkei. She was a radio presenter at the community radio […]

Thuthula Mngenela has been a radio presenter and content producer for a decade. She has a strong communication and media background and brings with her a wealth of experience. Thuthula is passionate about assisting people to transform and evolve on their life journey while finding hope in all situations. You can listen to her on Ubomi ku Krestu.

Guilma Stander celebrates 25 amazing years in the media industry as a voice artist, radio presenter and television and field journalist this year.  She is incredibly passionate about people and her work. Her warm and caring personality is complemented by her pleasant and soothing voice. She can be heard on Leefstyl.

Líomee Vosloo is the co-presenter of Get Up & Go along with Brad Kirsten. She is a qualified journalist, preacher and communications specialist with almost 10 years of media experience. She is also the founder and project manager of the Afrikaans web series called @niePlastiek, that reaches thousands of young people with the gospel of […]

Jenna-Leigh Bilong is a well-known television news anchor, radio presenter, author, entrepreneur and pastor. She has more than 10 years of broadcasting experience on both national and local platforms. She intends to use this experience for the glory of God and the expansion of Christian media to win more souls for Christ. Together with her […]

Sorry, there is nothing for the moment.

Focus on the Famliy 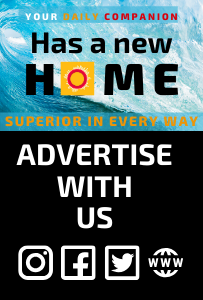